Over the years I have had many people ask me how long the feed will last in a Covey Coop,Â  and how often should they check them.
Of course,Â  the answer will vary depending on how many quail are using the feeder and what season of the year it is.Â  Generally,I check them every 3-4 weeks to see how fast the feed is going down.
To shed some light on this, let me share the results of a little test I conducted several years ago.
One year, as I was finishing up my “early release” quail project, I decided to hold back one covey of 25 quail
and leave them in the flight pen, so I could conduct a small experiment. I removed all the commercial feed from the facility and left one Covey Coop in the flight pen. I filled the Coop Feeder with grain sorghum (about 25 pounds) and began to track how much the feed level changed each week.Â  Once the feeder was filled, I moistened my finger and went around the edge of the feed level to mark the starting point. (Because the lid seals everything up, the mark will remain until I fill it with grain again.)Â  Â  As you can see from the picture, after one week, the 25 quail just created a slight depression in the middle of the feeder. 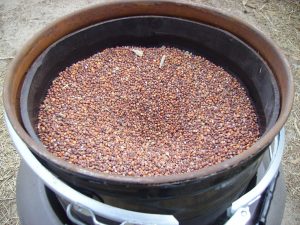 The remaining photos show the amount of feed the quail used during each of the following weeks. 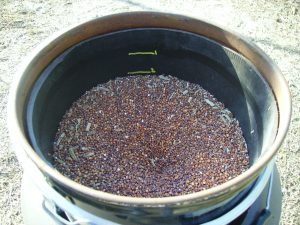 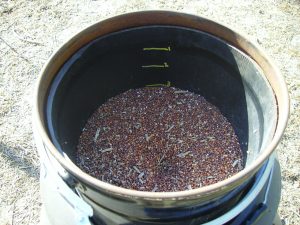 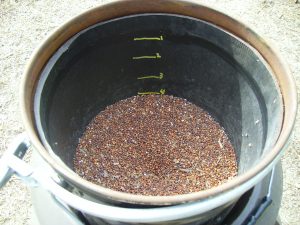 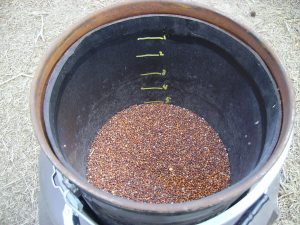 You can see that even after six weeks, these twenty-five quail still had enough feed for one more week.

This test was conducted during the cooler fall months of the year.Â  Â It is important to remember that the colder the temperatures , the greater the demand is for feed.Â  Unlike this test where the quail were confined, free ranging quail will also be feeding on any natural food sources that you have provided on your hunting area.

Helpful Hint 1 :Â Again,I generally check my feeders every three to four weeks after my initial quail release.Â  After removing the feeder lid, I mark the liner at the top of the feed level (as I did in the flight pen test).Â  Â When I inspect the feeder on my next visit, I can see how much lower the feed level is since my prior check.Â  This simple practice allows me to see which feeders are getting the most use and also helps me figure out how often I will need to top out my feeder.

Helpful Hint 2:Â Â When servicing a feeder that is getting low on feed, I like to go ahead and dump the remaining feed in the coop lid and clean out any trash from the feed liner that has accumulated in the bottom.Â  Then refill the feeder and scatter the feed in the lid in cover areas adjacent to the feeder.Â  Sometimes the sorghum that I am using is very pretty clean and this is not as much of an issue.Â  But if your feed has a lot of stalk pieces and trash, you will find this practice helpful.

Quail will ebb and flow from the feeders as changes take place.Â  I have seen coveys become pretty much independent of the feeders in early fall, only to return to heavier use in late winter.

1 thought on “How Often Do I Need to Service My Covey Coop Feeders?”