The following article is a series of questions and answers I posed to I.B. Parnell, wildlife biologist with the Georgia Department of Natural Resources. He has directed and coordinated wildlife management operations on Di-Lane WMA since 2005. 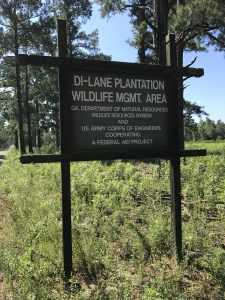 Tell us about Di-Lane Plantation.

Di-Lane is located in Burke County, Georgia about 30 miles south of Augusta. It is 8,100 acres owned by the Army Corps of Engineers and managed by the Wildlife Resource Division of GA DNR. Among the management goals are to produce a robust bobwhite quail population and provide quality hunting experiences for bobwhite quail and many other game species.

Years ago, I used to help your people with the annual fall quail census on Di-Lane. Back then we observed the habitat improving each year, yet the quail population seemed to remain stagnate. Is this why you began to consider predator control and supplemental feeding?

Bobwhite quail management begins and ends with habitat management. By the year 2000 the quail population on Di-Lane had dwindled significantly-as has been the case on many properties throughout the southeastern U.S.- because of poor habitat conditions. As a result of this decline, the Georgia WRD initiated a property-wide habitat renovation project in 2001 to include thinning of closed canopy planted pines, thinning of mixed pine-hardwood upland stands, and removal of natural pine dispersal that had encroached into fallow field habitat.Through this habitat renovation project, quality quail habitat increased from 3,400 acres to 5,400 acres. Based on quail hunter success as measured in numbers of coveys found per hour of hunting,the results from this large scale habitat improvement were roughly a doubling of the quail population.Even with this increase in quail population, hunter success was still relatively low (1 covey found per 5 hours hunted 2002-2007).
Using the fall covey count survey technique that you mentioned, we were able to determine the quail population at Di-Lane was 1 quail/ 4 acres. At this point in the management program we were managing habitat and harvest mortality (via a quota hunting system). From 2006-2009 we saw only minor changes in the population density.
Research has shown that there are other management tools available that can further increase the quail population on a property. These are supplemental feeding and predator management. We documented a significant decline (18%) in
the quail population at Di-Lane following a drought in summer 2007. Supplemental feeding appears to decrease the severity of these declines during drought periods.
We conducted predator scent station surveys to determine what our predator index was on Di-Lane. The surveys showed we had a high predator index on the property, and verified that predator management would likely improve our quail population.

Why did you decide to use Covey Coops on the area and how many years have they been in use?

There are two main methods of delivering supplemental feed to quail: stationary feeders and broadcast spreading.
As mentioned previously, Di-Lane is a multi-use WMA, which means that quail management is not the only thing going on. While it is legal to provide supplemental feed and hunt quail around it, it is not legal to do so with wild turkeys. In addition quail hen body condition prior to nesting season is an important factor in nest initiation and egg laying, so providing hens with supplemental feed in late winter/early spring can influence their productivity throughout the breeding season. We had to find a way to provide the supplemental feed to the quail, but make it unavailable to deer and turkeys. Covey Coops provided us with the delivery system to accomplish both of these objectives and have been in use since fall 2008.

What steps were taken to allow the wild quail population to adapt to the feeders?

When we first installed the Covey Coop feeders, we put them in four different cover types(plum, bicolor, brier thickets, and brushy vine-covered edges) and monitored the quail usage with trail cameras. We also scattered grain sorghum 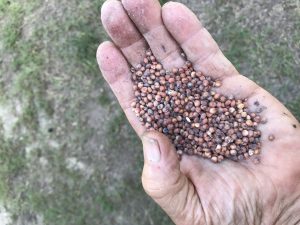 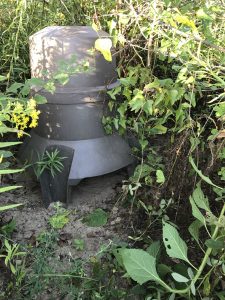 but not in those brier thickets or along brushy edges, so we moved all feeders into plum and bicolor thickets. The percentage of feeders used by the quail increased steadily each year.
In 2011-2013 we had a dramatic increase in the feral hog population on Di-Lane. The hogs learned that they could flip over the feeders and roll them to get the grain sorghum out. Within days of filling the feeders, the hogs would have them emptied. To exclude the hogs from the feeders, we placed two T-posts with a circular portion of cattle panel wired to the posts around each Covey Coop. Since fencing the feeders, we have no further hog problems with them.

How did you determine when the quail were successfully using the Covey Coops?

We measured feeder success in two ways:1) using the camera surveys to determine quail usage 2) anecdotal quail crop surveys from hunter-harvested birds. There was no grain sorghum available anywhere on the WMA except in the feeders,
so if we found grain sorghum in quail crops, then it had to come from the feeders. Ultimately, we want the supplemental feed to be available if the quail needed it.

How are the feeders managed going into the spring and summer season?

Feeders are generally filled four times a year-approximate time periods are March, May, September, and December. We also have to manage trees that invade the thickets with herbicide.

In your opinion how has the feeding and predator management helped the quail population at Di-Lane?

As we discussed earlier, quail management begins and ends with habitat management. Without habitat, you can provide all the food in the world and remove all the predators and see no substantial increase in the quail population. I can not directly attribute our quail population increase to either supplemental feeding or predator management. However, I feel comfortable saying that the combination of supplemental feeding and predator management, along with maintaining high quality habitat, has been responsible for increasing our quail population from 1 quail/4 acres to 1 quail/2 acres.