Every year about this time someone calls to find out if we have any plans for building a holding pen for quail. Some of these people want to have birds available to them for release several times during the year. Often, the bird grower is a good distance away, and making multiple trips to get birds becomes too expensive. Also, birds are exposed to stress when they are hauled a long distance. A large holding pen lets them recover before being released. 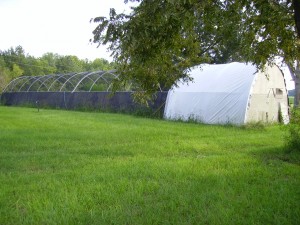 Unfortunately, we don’t have any printed plans to make one, but we can tell you what Jim did that has worked well for us. Â  Jim also made the pictures, so he is in very few of them.

Back in 2003 Jim did an internet search and telephonedÂ  Atlas Greenhouse Systems, Inc .in Alapaha, Georgia, to order a 20’x84′, 6′ spacing Cold frame. He decided on thisâ€œhoopâ€ shape since it was cheaper than using lumber to build a traditional box shape. Also, the curve allows the pen to shed snow and ice rather than collapsing under the extra weight.

Then he got busy. 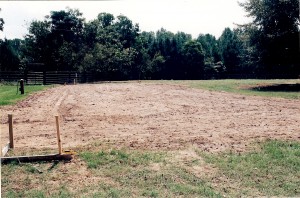 Of course, the first step in building is to level the site.

The frame came with directions as to how to assemble it which he followed. One step he added was to set the four corners in concrete as well as the two middle supports. 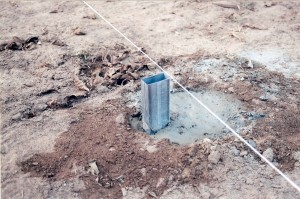 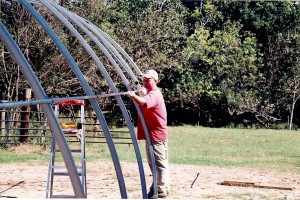 Putting up the netting was the next step.Â  To begin Jim marked the center of the width of the netting with a piece of flagging tape and tied a strap to it as well.Â  This gives you something with which to pull the netting along the top of the pen from one end to the other. 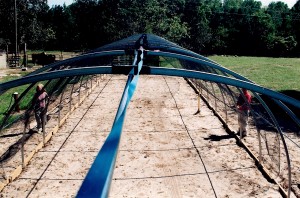 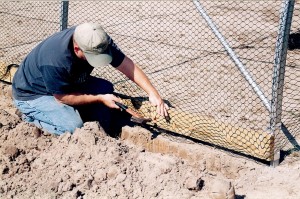 Working from front to back the netting was secured to the 2×6 boards with simplex nails.

Next, a foot deep trench was dug along the outside edge of the holding pen baseboards. 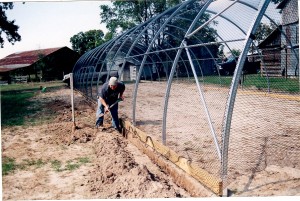 Then the top of the chicken wire was attached to the conduit using black zip ties. 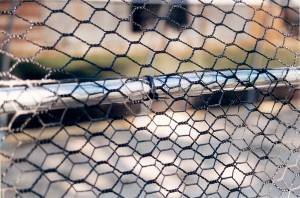 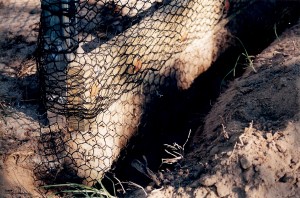 The wire was also secured to the boards with simplex nails.

The shade cloth went over the chicken wire and was attached to the conduit and boards with zip ties and simplex nails. 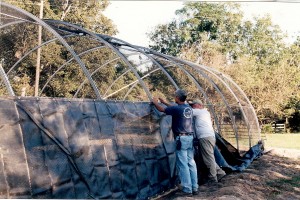 Using wood screws he attached treated 1×4 boards to the 2×6 boards along both sides and the lower end. This sandwiched the netting, wire, and shade cloth in the middle to protect them. Lastly, the ditch was back filled. 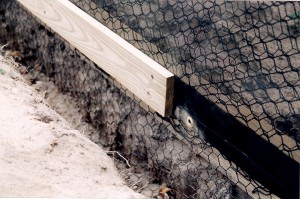 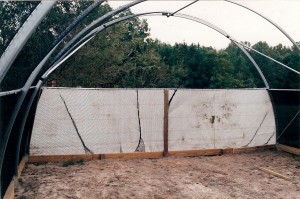 Now Jim wanted to section off a portion of the pen to allow himself more flexibility in using it. He began by constructing an interior wall twelve feet from the open end. 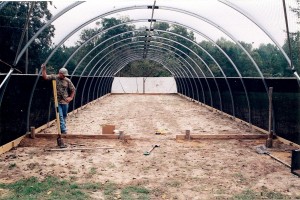 For framing he used 2x4s on their sides and attached heavy duty exterior fabric. (He could have used tin or 100% shade cloth.) 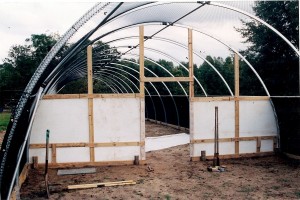 He left space for a door in the middle.

To connect the wood frame to the bow at the top of the pen, he used a piece of thin metal and tech screws. 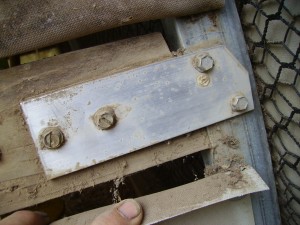 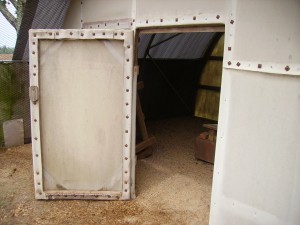 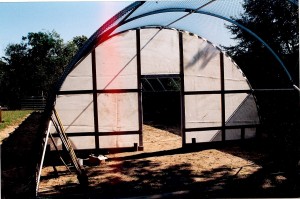 Next he added the inner door.

To enclose the open end, Jim repeated the process of framing and attaching the fabric. He did, however, add the chicken wire underneath the fabric to complete the predator proofing to this end wall and door. 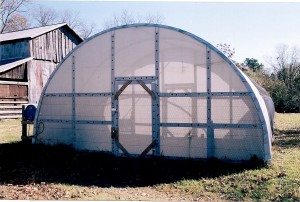 Lastly, he put on the custom super heavy tarp with the white side up to reflect the heat. 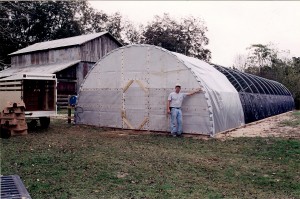 He cut off the excess length and secured the ends. 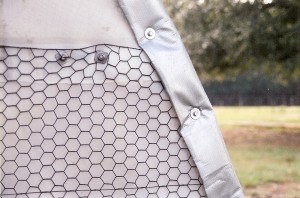 The extra foot of the tarp created an overhang at the inside door. 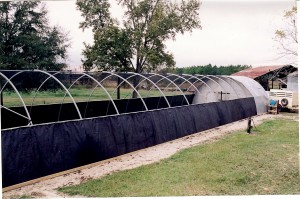 Now that the pen was finished, Jim had to get it ready for birds. He wanted to put around 350 adult birds in it, although it would easily hold 500.

Jim put a couple of our coop feeders filled with grain out in the main area for the birds. This will get them used to feeding from them after they are released. It is not essential to do this, but it doesn’t hurt. Some yearsÂ he also plants some sort of cover, like Egyptian wheat,Â and sometimes he just lets the weeds come up. 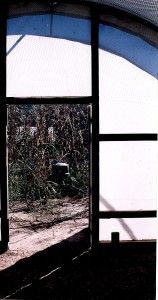 In the small back area he also placed a couple of feeders. These are Many Ports feeders filled with commercial feed. 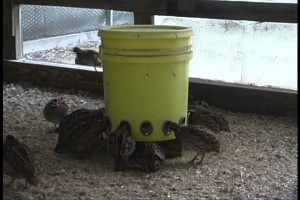 The watering system was located here as well. Jim put in a gravity fed watering system because there was no waterline run to the pen at that time. The system was comprised of a thirty gallon plastic drum and a Nature’s Way nipple waterer. 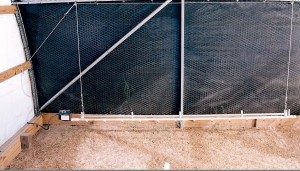 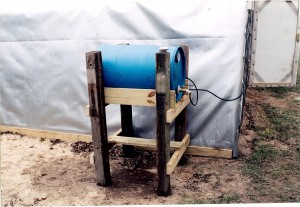 The catch up box was also placed in the smaller area of the pen. 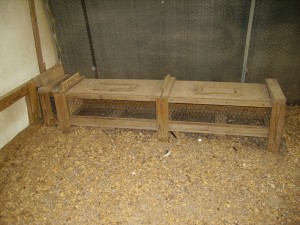 It is a long narrow box with a drop door located at one end just inside the large area of the pen. 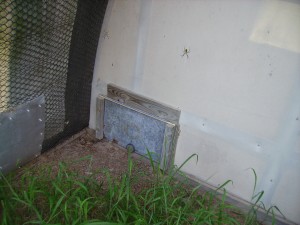 Birds in the larger area can be calmly nudged toward this opening. 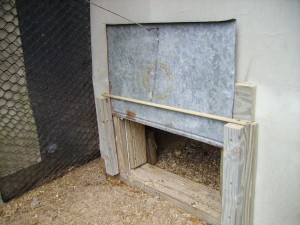 When the desired number are inside, the door is dropped, and the birds are trapped inside the box.

Jim then goes into the smaller area through the door closing it behind him. The birds are then retrieved through a hole in the top of the catch up box. 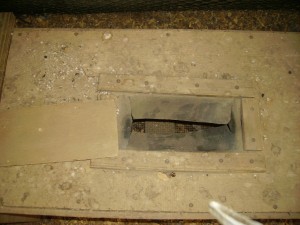 The hole was covered with a piece of a tire inner tube with a slit in it. This allows Jim to reach in and get the birds one at a time. With the pen’s inner door shut, an escapee will be confined to the small area of the pen.

Since Jim built the holding pen, we have had very low maintenance on it.Â  We did replace the tarp after nine years.Â  Also, we have filled in a few holes where varmints have tried to dig underÂ under the sides.

Recently he ran a waterline to the pen and installed 3 water misters along along the top. 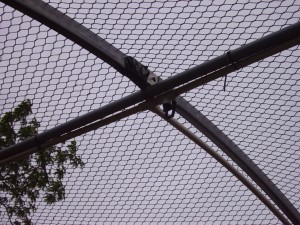 These are a big help in cooling the birds down on hot days as well as stimulating their oil glands which are used in preening. Also, they provided water for whatever is growingÂ  on the pen floor.

The holding pen has been a great asset to our program. It allows Jim to have birds at less cost for his preseason release project, and prepares the birds for an easier adjustmentto living wild.

All of the feeders mentioned in this article are available at our website qualitywildlife.com

Below is a list of vendors we used back in 2003 to build our flight pen. We don’t have any affiliation with them except as a customer.

Thank You for stopping by! If you have any questions, please feel free to Contact Us!