When I was a youngster staying on Uncle Jim’s rural farm in Virginia, the Johnny House was a place you ran to answer the call of nature. Back then we rated them as One Holers or Two Holers. If you train your own bird dogs you are probably familiar with a different type of Johnny House, often referred to as a Recall Pen.
The most common structures used are about four feet square and about six to eight feet tall. (Of course, in Texas they are twice this size.) The house has a screened in top area and ledges for the quail to fly up and sit on. Part of this screen area contains a door that can be lowered in order to let some or all of the birds out. The floor can be either solid plywood or hardware cloth. (I prefer a solid floor. Well talk about this later.) There is also a one way catch funnel located in the bottom of the house. This allows the quail to reenter the house but not leave again. 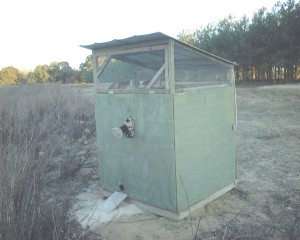 The typical structure will hold 15-25 quail and can be set up in a small field. The objective is to keep the confined birds healthy and available until you are ready to work your dog. After you pick up your dog and leave the training area, the quail are recalled back to the Johnny House by the birds that were not released or with the assistance of a digital recall device.
Inside, the quail find protection from predators and extreme weather conditions. They also have feed and water to hold them over until you return again.
The ledges, located near the top of the house, help the birds maintain flight muscle strength as they fly from the floor up to the shelf. (Many people dont realize this but most of the wing exercise is generated on the rise.) It is rare but if you should have a small varmint get into the house through the funnel, the birds can fly up to the ledge to get away. 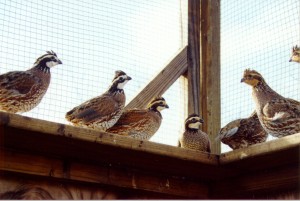 If you dont own a large piece of hunting land or the land you have access to is not close to where you live, then the Johnny House may be just what you need. The most common use of the house is to provide quail for dog training purposes. Training a dog to be steady on point or to honor another dogs point by backing requires having birds with which to work. The Johnny House becomes the ready source for such birds. Quail can be manually caught and placed in a bird launcher or dizzied and placed in the field before the work begins. As the dogs training progresses, you can release all or part of the birds from the house by lowering the release door and letting them fly out into the field. Once you have watched to see which cover patches the quail land in, you can then go get your dog and begin working the field.
Another use for the house is to train a young bird hunter how to work the dogs and be a safe hunter. This is a more controlled setting that presents a youngster with enough action to keep him/her interested in learning the finer points of wing shooting.
If your quail hunting area is only large enough to have a few wild or early released coveys, then the Johnny House can be used to provide additional birds during hunts. These additional birds will take some of the hunting pressure off your premium coveys.

Getting Started
Of course, the first thing you need to do is build the Johnny House. Plans are available from several catalogs that sell dog-training supplies. The plans used in this article are available from Quality Wildlife Services, Inc. (www.qualitywildlife.com)

Site Location
The field setting for the house should be good quail habitat. A field of fescue or bermuda grass will not work. Instead, find a field dominated by native grasses and weeds along with scattered small patches of heavy cover such as briars or small shrubs. If you are able, it is also a good idea to add a few scattered food plots of Egyptian wheat or sorghum to the setting. This gives the quail a visual target to fly to as they leave the house.
Place the Johnny House out in the field away from any rank or unhuntable thickets. The goal here is to make sure when the birds are released, that they dont peel off into the jungle but rather they fly out into the work area.
Once the house is set in position, you can place some light brush tops around the funnel entrance on the outside of the house. This will give the returning quail some concealment cover as they mill around the funnel entrance.
Preparing for the Quail

First, you will need a way to feed and water the birds. For many years I avoided using a Johnny House because of the time it took to keep the birds serviced. The quail were constantly fouling up the feed and water with their droppings or the feed would get wet and nasty after rainstorms. Thats why I developed the LessMess feed and water system. The system holds enough feed and water to take care of 25 quail for two to three weeks and is designed to prevent any contamination from the droppings. This feeding system also prevents you from taming down your birds because it is not necessary to enter the house as often. 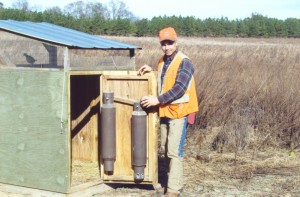 LessMess Feeder and Nipple watering system takes care of 25 quail for about 3 weeks.

The kind of feed used is important. Wild or early season released quail are free ranging so they do very well when supplemented with grains. This is because they are able to pick up green forage and insects as they find them. Since the Johnny House birds are only free ranging off and on, you need to provide a more complete diet. I obtain commercial game bird feed from a local bird grower or a feed store and mix it about half and half with either sorghum or wheat.
I said earlier that I prefer a solid floor in my Johnny House. Now let me explain why. First, with a solid floor I can place about a one-inch thick layer of clean sand in the bottom of the house. This gives the quail sand to preen and clean their feathers. The sand also absorbs moisture from the droppings and makes for a more sanitary environment. Secondly, I add a double handful of hay and place it in a corner of the house. The hay, along with the sand floor, enables the birds to stay much warmer during extremely cold weather.

A happy bird is a healthy bird.
Managing the Quail
The first thing you need to do is to get the quail into the Johnny House. I usually place the birds into the house one at a time by feeding them into the funnel. To do this, just open the door of the house and place the first bird inside. Next, put the remaining quail in through the funnel. As each bird gets started up the funnel it will see the remaining bird inside and not hesitate to go on in. This allows the birds to get familiar with the funnel. 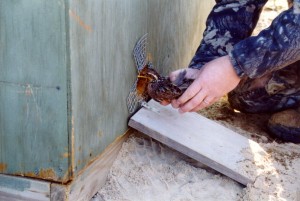 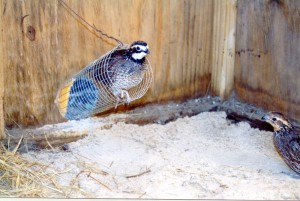 I like to leave all the birds in the house for about a week. During this time they can begin to bond as a unit and get familiar with the surrounding landmarks and horizon. After this, I return and let about one third of the birds out. If you are using a Total Recall (digital recalling device) on the house, now is the time to turn it on. The unit is designed to give a sequence of covey-up calls at various times of the day. When the unit begins to call, the released birds begin to make their way back toward the house. If you do not use the digital caller you will have to depend totally on the remaining birds to do the job. I repeat this process several times until all the birds have made several trips in and out of the house. 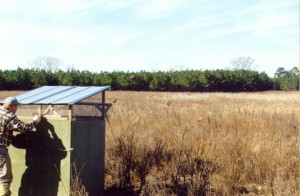 When you go to release birds for working your dog you will notice that wherever the first bird goes, the rest want to follow. This can work for you. Lets say that the first bird flies out straight to a briar patch about 50 yards out in the field. I like to let four or five more follow him and pitch in while they can still see him in flight. Then I pull the release door shut to stop the flow. Once all the first birds have set down, I reopen the door and see if the next batch will pick out a different spot. This way I can often get a good spread without having them all pitch into the same patch of cover. If the first bird sails out of the house toward an undesirable place, just pull the release door shut until he is no longer visible and try it again.
I like to leave at least one or two birds in the house to give the returning birds a stronger desire to get back inside.
One last note. All this is fine during the fall and winter months, but once the days get longer and spring approaches the hormones start flowing. This means that the cock birds will begin to get feisty and the covey behavior breaks down.
At this point I empty out the house and get it clean for next season.

Maintenance
About half way through the season I perform a quick house cleaning. To do this I take a flat point shovel with the handle cut off, and remove all the old sand and hay. Then I replace it with clean sand and put a double handful of hay to one of the corners. 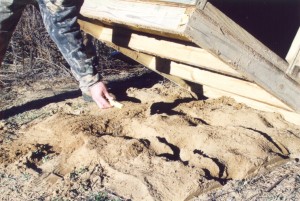 8 thoughts on “Johnny’s House a Home on the Range”